Skip to main content
WE DO NOT SHIP ORDERS. Local delivery and pick up only.

First things first, we are going to start with the question, “What exactly is Whiskey?” Whiskey (or Whisky) is a spirit that is distilled from fermented grain and is then usually aged in wooden barrels for a period of time. Whiskey can come from all over the world and each area of origin generally has its own style. Factors that can distinguish the different styles can be the type of grain used (might be corn, barley, rye or wheat), barrel type used, aging time and distillation technique. 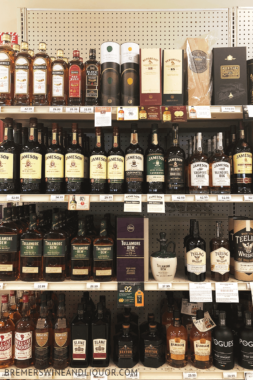 Now, onto what makes Irish whiskey Irish. The first important factor (as I’m sure you have already guessed) it must be made on the island of Ireland. This includes the Republic of Ireland and Northern Ireland. The spirit ranges from a pale gold color to dark amber.

What is Irish Whiskey made from?
Irish Whiskey must be made using malted barley and may include other unmalted cereal grains. The possible inclusion of other grains leads to four different varieties of Irish Whiskey.

Malt: This type of Irish Whiskey is made using only 100% malted barley and is distilled in pot stills. If a whiskey is termed “Single Malt” that means the whiskey comes from one distillery.

Pot Still: For and Irish Whiskey to be termed Pot Still it will be made from a minimum 30% malted and 30% unmalted barley. It can have up to 5% of other cereal grains added and it must be distilled in pot stills. Like single malt, if a whiskey is a “Single pot still whiskey” that means it comes from only one distillery.

Grain: To be marked a Grain Irish Whiskey, the spirit must be made using no more than 30% malted barley in combination with other whole unmalted cereals (these are usually corn, wheat, or barley). Grain whiskey is distilled in column stills. Once again, if a bottle is marked “Single Grain” it comes from only one distillery.

Blended: If an Irish Whiskey is blended that means it is a mixture of two or more of the above styles.

How is it made?
Similar to bourbon, there are laws regulating certain factors in the process of making Irish Whiskey. These requirements are defined by the Irish Whiskey Act of 1980.

To be considered Irish Whiskey it must by law:
-Be made from a mash of malted barley with the option of adding other cereal grains
-Be mashed, fermented or distilled to no more than 94.8% ABV, and must be matured in wooden casks (not exceeding 700 liters) for a minimum of three years in the Republic of Ireland and/or Northern Ireland
-Cannot contain any additives other than water and caramel coloring
-Must retain the characteristics of its raw materials (this means it must smell and taste like whiskey)
-Must be bottled at no less than 40% ABV

Most Irish whiskies are triple-distilled (although not required by law) which results in a smoother tasting whiskey than most other types. (To compare, Scotch is normally distilled twice and most American whiskies are distilled only once).

How long is it aged?
All Irish whiskies must be aged for a minimum of three years. There are a handful of distillers in Ireland that with continue to age it for 10, 12, 16 or 21 years. These extra years in the barrels are meant to help develop flavors of vanilla, honey and other flavors from the wood. 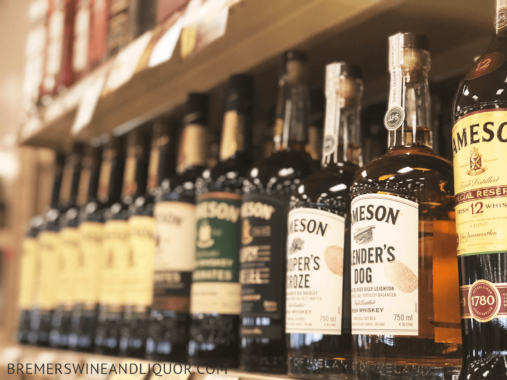 Now onto the important part…. What does Irish Whiskey taste like and how should you drink it?
First, know that every brand/type will have it’s own taste depending on how it is made and what it’s made with. However, we can generally say, Irish whiskey tends to be smooth and a bit lighter than other whiskies because of the triple distillation it typically goes through. It is also going to be less sweet than most American bourbons and won’t have the smokiness that Scotch develops from the peat.

Generally speaking, Irish Whiskey is great for sipping, you can try it neat, add a few drops of water or on the rocks. If drinking it straight is not your thing, try adding club soda or ginger ale (however we don’t recommend buying an expensive Irish Whiskey if you plan on mixing it). The most important part of this is to try your different options and drink it how you like it!

If you’re looking to learn even more about Irish Whiskey (or Whiskey in general) visit WhiskeyAdvocate.com.

Only two days until we go down the Rabbit Hole! Th

Don't forget to shop some of our newest offerings,

See you tomorrow at our Jameson and Kahlua tasting

Close out January with six highly-rated wines at a

Did you pencil in time for our National Irish Coff

As cool as a January day, gin is a summertime favo

Now in stock, the @wine_spectator 2022 Value of th

The weather may be cold, but the winter Bremer's B