Skip to main content
WE DO NOT SHIP ORDERS. Local delivery and pick up only.

By an act of Congress in 2007, September was declared National Bourbon Heritage Month. The bill reinforces the 1964 Act of Congress that declared bourbon “America’s Native Spirit” by celebrating the family heritage, tradition and deep-rooted legacy that the bourbon industry contributes to the United States.

Celebrate the history of bourbon and it’s American legacy by checking out these 10 facts we found about bourbon you might not know. 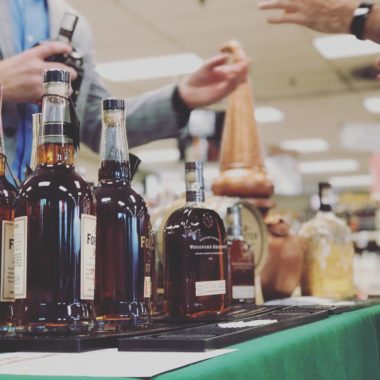 ONE
While 95% of bourbon is distilled in Kentucky, it can legally be produced anywhere in the United States… Connecticut, Kansas, even New York… you name the state, it can be made there.

TWO
Bourbon, second to America’s Native Spirit is also known as the “honest spirit” because nothing extra can go into it (other than water). No artificial flavors, no caramel coloring… nothing. This stems from the strict regulations on the spirit in order for it to be considered a bourbon.

FOUR
Bourbon must be aged in NEW charred oak barrels, so what happens to all those barrels? Many get shipped to Scotland for aging Scotch or Mexico for aging Tequila. Recently they also began to get used by wineries and breweries to impart delicious flavors to craft beers and red wine.

FIVE
Barrels of bourbon outnumber people in Kentucky… As of 2014 Kentucky’s population was estimated around 4.41 million while the number of bourbon barrels ended somewhere around 5.6 million.

SIX
During Prohibition your doctor could write you a prescription for bourbon…”many doctors continued to prescribe alcohol for anemia, tuberculosis, pneumonia and high blood pressure, among other disorders. The new laws required them to use special prescription pads issued by the U.S. Treasury Department and regulated how much liquor each patient could receive. (Typically, adults were allotted 1 ounce every few hours after shelling out $3—equal to about $40 today—to a local practitioner.)” (History.com)

SEVEN
A term you might see on bourbon bottles is “Bottled-in-Bond” or “Bonded”. This means the bourbon was made at a single distillery, by one distiller in one distillation season, aged for at least four years in a federally bonded and supervised warehouse, and bottled at 100 proof. These regulations were put into effect when distillers lobbied congress to pass the Bottled-in-Bond Act of 1897 to give their product’s a mark of quality assurance during a time when many other distilleries were making diluted, blended and boot-legged products.

EIGHT
Bourbon does not have to be aged for a certain amount of time. However, to qualify as “Straight bourbon” it must be aged for at least 2 years.

NINE
“Small batch” bourbon is not a legally defined category, so while it means the bourbon in the bottle comes from a limited number of barrels, that number of barrels is not well defined. Depending on the brand, it can mean they pull from as little as 10 barrels, however other distilleries’ might pull from as many as 100 barrels and still consider it Small Batch.

TEN
During World War II many distilleries in Kentucky were transformed to produce penicillin, which like Bourbon, is a product of fermentation.

Only two days until we go down the Rabbit Hole! Th

Don't forget to shop some of our newest offerings,

See you tomorrow at our Jameson and Kahlua tasting

Close out January with six highly-rated wines at a

Did you pencil in time for our National Irish Coff

As cool as a January day, gin is a summertime favo

Now in stock, the @wine_spectator 2022 Value of th

The weather may be cold, but the winter Bremer's B